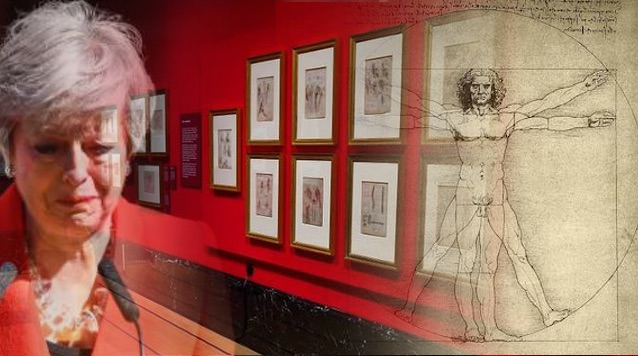 The rebirth of Leonardo da Vinci and the Holy Grail/Royal Blood moves on to a new phase on Friday, May 24th as the biggest exhibition of his work in 65 years commences at the Queen’s Gallery at Buckingham Palace, the headquarters of the British royal family…

LONDON: Leonardo da Vinci’s thumbprint and preparatory sketches for some of his most famous works are going on display to the public at Buckingham Palace, in what is being billed as the biggest exhibition of the artist’s work in more than 65 years.

Marking 500 years since his death, Leonardo da Vinci: A Life in Drawing, which opens at The Queen’s Gallery on Friday (May 24), boasts more than 200 drawings by the Renaissance artist, taken from “the unrivalled holdings” in Britain’s Royal Collection. […]

The Queen and May… “May Queen”… evoking the Virgin Mary or Notre Dame once again.

It’s amazing what’s happening. We saw it coming and it’s unfolding before our eyes…

May 02 Reborn: The Da Vinci Baby